Although this wasn’t an official tour with Maui Spearfishing Academy, its still a story worth mentioning, and an experience all spear fishermen dream to have! I decided to text my buddies David and Jarret, for a last minute shore dive (where we swim out from shore instead of using a boat). I knew we were going on a serious hunt as both of them can dive well over 100 ft, and have experience shooting BIG fish.

The plan was to head far off shore and chum (cut up pieces of squid, in this case, hoping to attract big fish). Then we would head back in to shallower water (80 ft.) and dive to the bottom to shoot smaller fish if the big guys weren’t around. Our first chumming session ended with a sighting of a Mahi Mahi, which is amazing to even see on a shore dive, but no fish were caught. We drifted in and did a couple dives to the bottom where David managed to shoot a massive Kumu (A great eating type of goatfish). Jarret seemed anxious to get back out to the deeper water and really wanted a shot at what was our real goal for the day, a big ono. So we swam back out to the depths and started to chum again.

I start to chum, and i dropped a whole squid on accident. I dove down about 10 feet to retrieve the squid when I heard the sound of a spear gun fire! I looked in the direction of Jarret and saw him attached to what looked like a 40 lb. Ono! The Ono fought for about 30 seconds before breaking free of his spear gun shaft:( Excited but bummed out, we chummed more and continued our drift. A while went by without seeing anything, and we decided to change locations and swim up against the current. Not long into the swim I hear David yell “Onos!” and he threw his flasher to attract them his way. A school of 4 big onos swims right under him and he takes a great top shot right onto a 31 lber! Instead of helping him I decided to go for another ono that had turned toward a flasher I threw the moment David yelled onos. A 34 lber swam right up to me and turned broadside, so I took a great shot on that one too!

The next 10 minnutes were kind of a blur, as both onos shot off in different directions. Onos are known for making 2 big runs, where they swim in 1 direction for a long time at high speeds, then finally slowing down. This makes it extremely hard to land them if you don’t disable them with a spine shot. Fortunately, although my ono did run twice, it stopped just short of 200 ft both times, which was all the line I had room for on my reel. I secured my fish, and what do you know! David caught his too!

All About Fish’s Annual Reef Rescue! 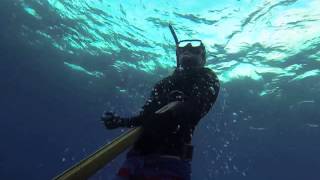